The first directive on Restriction of Hazardous Substances (RoHS) in electrical & electronic equipment (EEE) was published back in 2003. On 3 January 2013 the second directive (RoHS2) came into force: Directive 2011/65/EU.

Directive (EU) 2015/863 adds four additional substances to ROHS. DEHP, BBP, DBP and DIBP are hazardous phthalates and will be restricted after 22 July 2019 for most electrical products (EEE).

The ROHS and WEEE directives are strongly interconnected. Both directives have the same scope. RoHS restrictions contribute to environmentally safe recovery and disposal of waste EEE.
The WEEE directive specifies the related obligations including the marking of EEE:

RoHS and REACh are different

The RoHS directive restricts only a few substances and only for EEE. REACh is an extensive regulation for many hazardous substances and mixtures. REACh regulates substances in all articles.
RoHS and REACH apply in parallel. If overlaps occur then the strictest restriction is applicable.

RoHS applies to cables too

An USB cable has the same restrictions as a smartphone with an USB port. Cables for household appliances, consumer equipment, toys, lighting and other EEE must fulfil the RoHS restrictions; cables require CE and WEEE marking.

The ROHS Directive does not apply to transport means, such as vehicles, and their components. Waste management for vehicles, including their components and materials, as well as spare and replacement parts is regulated via the "End-of-life Vehicles" (ELV) Directive 2000/53/EC.
This directive contains identical restrictions on the same four heavy metals as RoHS.

CE marking is an obligatory part of RoHS Directive 2011/65/EU, this was not yet the case before 2013 and the first RoHS directive.
"Manufacturers draw up an EU Declaration of Conformity and affix CE marking on the product." 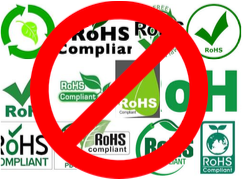 RoHS symbols other than the CE marking remain very popular.
But as a consequence of the mandatory CE marking other symbols to show compliance with the RoHS directive are no longer allowed.
Market surveillance authorities have withdrawn products from the market with these self-made symbols, so get rid of them today and affix only CE (and WEEE).

The European Commission issued a helpful FAQ Guidance about RoHS in 2012.

We value your feedback