Plastic bags can be dangerous

"WARNING. Keep this plastic bag or film away from children to avoid suffocation"

Similar warnings are found on many plastic packaging materials. Warnings must be clear, legible, mention the hazard and translated into the regional language(s).

Eliminate the risks and avoid warnings!

What is the risk of plastic packaging materials and how can the risk be eliminated? Safety guidance can be found in CEN/TR 13387-3 (Hazards of child use and care articles) and in standard EN 71-1 (Safety of toys).
This is how to eliminate the risks:

Plastic films with a surface larger than 100 by 100 mm are able to cover the mouth and face. Smaller films will not so easily cover both mouth and nose and are safer.

The risk of suffocation is higher with thin plastics. Because thin plastics are able to mould (stick) easy to the child's face. The risks of plastics with a thickness of more than 0,038 mm is 'less significant'.

Suffocation is caused by the fact that plastics do not let through any air, and breathing becomes impossible.
If perforations are added to the plastic, then air gets through and the suffocation risk is reduced significantly. 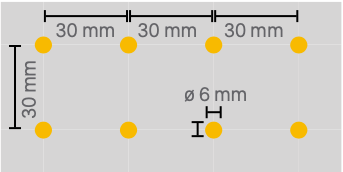 Children start crawling at the age of 6 months and may grab a plastic bag that is left behind in the room.
Plastic bags can be pulled - accidentally or during play - over the heads of children leading to suffocation.
Statistics of the World Health Organisation (WHO) show that children of 3 months age have a head perimeter of 375 mm and at 6 months age this has grown to 400 mm. The perimeter (or circumference) is measured all around the widest part of the child's head.

CEN/TR 13387-3 considers a perimeter of more than 360 mm as risky, while EN 71-1 applies 380 mm.
Both perimeters are smaller (safer) than the 400 mm head perimeter of 6 months old children; plastic bags with an opening perimeter smaller than 360 mm do not fit over the heads of these children.

Bags without perforations with an opening perimeter larger than 360 mm should also not have a drawstring or cord as a means of closing. Tightening the cord may cause suffocation or strangulation too.

Only if not all risks can be avoided then you should consider warnings as last resort.
Designs with safety in mind are so much better than warnings.